Raise Your Hand if This Happens to You

One reason I bought this eyeshadow trio was that it had such a large section of the lightest color.  You know, the one the makeup gurus say to “use from lashes to brow.”   The one that always and I mean ALWAYS runs out before you use the other colors. And then what?  <<sigh>>  I swear it’s one of those dastardly deeds the makeup people do to make us buy ANOTHER $$$ eyeshadow so we can have all our colors again.  And run out of the light one again.  On and on.  Like that groundhog movie.

Well, no sirree, bub.  Not this girl. Not this time.  Plus, when I ran out, I was nowhere near the unmentioned store that sells this product.  SO, I wandered into the nearby CVS.  And what to my wondering eyes did appear? 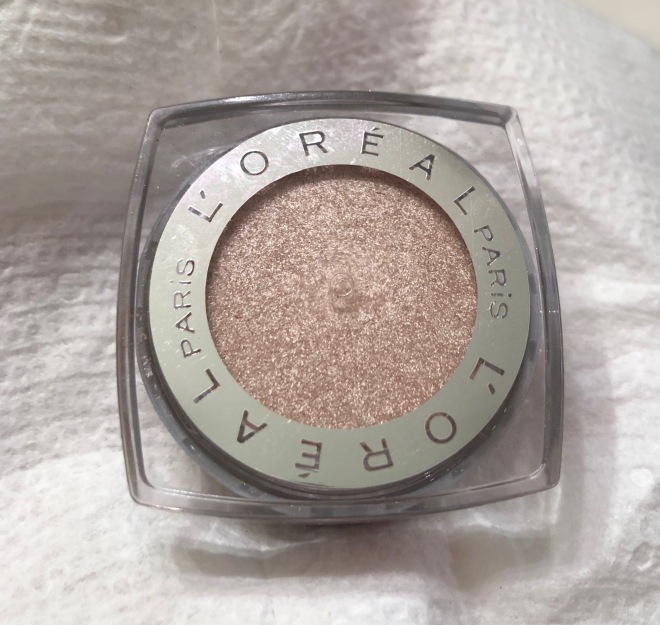 I’ll tell ya what I was thinking.  Cause I know you want to know.  I was thinking, there is no way I am going to like this eyeshadow as much as the Sma$hbx one.  However, my choices were limited. I was out of town, without ready transportation and, as I said, the store wasn’t anywhere nearby.

Was I ever in for a pleasant surprise! Isn’t it gorgeous? And it’s just as pretty on.

Did you notice? It’s upside down! How do they do that? (I can hear you asking yourself)(it’s ok. I’ll tell you). 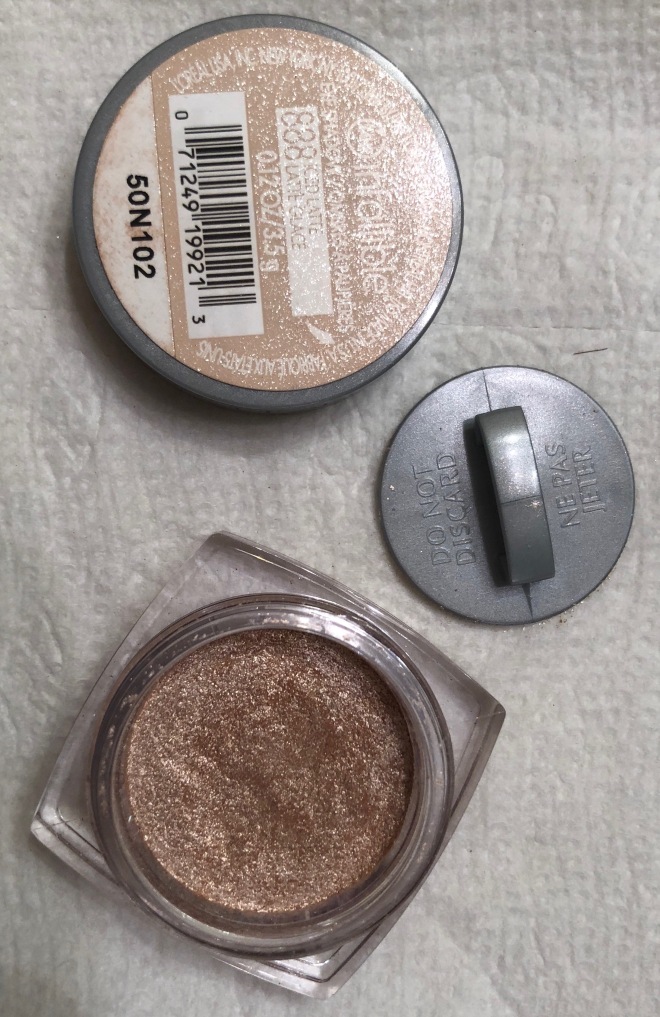 Isn’t that the coolest?  That little flat thing in the middle that says “do not discard?”  I really mean it – do not discard it!  That’s what holds the eyeshadow nice and cozy in it’s little container.  So very clever.  Wish I’d thought of it.  That and Google.  And Snapchat.  And Twitter.  And Instagram.  And Facebook….

Anyway, once it is on top of the shadow then you screw I mean the top on. Voilà!  Happy eyeshadow! And guess what the best part is? You can buy these pretty little singles til your heart’s content.  Or until you use up your dark eyeshadows! 🙂  Not only that, they have a gazillion colors, so you really should go crazy and get that electric blue your mother wore in the 70’s.  (Right MaeMae?)

While I’m at it, let’s have a little chat about mascara.  I have a hate-love-hate relationship with it.  I have to have mascara because the two or three lashes I do have are light brown.  You couldn’t see them with a nanoscope.  By the by, do you know the secret to using mascara without it coming out in clumps, especially when it’s new?  Wipe the wand through a tissue!  Brilliant! This allows you to put on light coats rather than leaving your eyelashes looking like they belong on Charlotte.  (yes, that Charlotte)

Wait, did you already know about the tissue trick?  And you didn’t tell me?  Sheeesh what kind of friend are you?  Hmph.

I’m pretty loyal about most things.  I will use the same flavor of body wash (yes I did call it a flavor – it smells delicious!).  The same ketchup.  The same order at ChikFilA.  Forever.  Mascara? Not so much.

I am, in fact, woefully unfaithful to mascara. It doesn’t even matter whether it works well or not. I don’t know what it is.  Effective advertising, perhaps.  Or my desperate attempt to deal with my wimpy eyelashes.  Or both.

ANYWAY, during the above shopping trip, my luck continued when I found this stuff:

Ok…  And…  So, Mascara Ho, what’s so special about this one?

Well, lemme tell ya.  It’s all in the brush.

It may be in that black stuff, too, but I have a serious crush on this mascara brush.  Take a close look:

Here’s the fat side.  Look at all those teeny teeny teeny bristles! There must be a million.  If those bristles can find my practically-non-existent lashes and make them look like Elizabeth Taylor’s (haha, I wish), they can probably do an even better job for you.  Now look at those little notches down below the brush.  Bendy!  The wand is bendy!  Like Gumby!  No, but seriously, there is no lash you can’t reach with this thing.  Do you make a face when you put on mascara?  I look like a mix between a thirsty dog and The Scream.  Yikes.  But not with this!

This, my little pretties, is the flat side.   You can’t see it as well as I would like for you to (my photographer stinks), but when you turn the brush sideways to the flat side, you can get every single solitary one of your bottom lashes without getting mascara all over your face.  Not that you would do that.  But just in case.  You can also fan out your top lashes til they look magazine perfect.

Seriously, this mascara is genius.  Will it be The One for me?  Time will tell.  We’re starting out pretty well so far!