Medellín: It’s Not About Pablo Anymore

Once again, my (coolest) job (ever) gave me an amazing opportunity: to visit Colombia, South America. The photo above was taken on our drive in from the airport, when we first caught sight of the vast city that is Medellín (pronounced “meh-de-zjean”). Surrounded by lush, green mountains, it is easy to see why Colombians (and many other nationalities, including a healthy gathering of expat Americans) love it: it’s beautiful. The climate (in January, mind you) was in the 80s, with beautiful blue skies every day we were there.

While there, we worked hard with intelligent and enthusiastic prosecutors, judges, and staff. What a privilege it was to do that. In our free time, we saw what the city and its surroundings had to offer. Which was plenty.

One day we went on what was called a “Transformation Tour,” which told the story of Colombia’s metamorphosis from the violence of Pablo Escobar’s day to the vibrant and happy city Medellín is today. Pablo once lived in an anonymous six floor apartment building. In February of last year, the building was demolished to the cheers of the Colombian people. In its place, a park and monument was built to honor the over 48,000 people killed by Pablo and his bombs. The monument, made of dark granite, is reminiscent of the Vietnam Memorial. On one side, it lists the years and locations of Pablo’s attacks. The other is covered with 48,000 holes, one for each of Pablo’s victims. I can’t find a photo, but we were told that on the day of the dedication, each hole contained a flower. I bet it was beautiful. 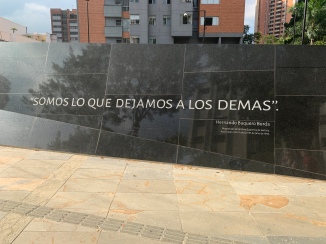 Speaking of crime, when I told friends and family where I was going, they were concerned for my safety; but, I never, ever felt unsafe there. Medellín is a FUN city with amazing restaurants and good shopping. It’s easy to reach from the U.S. (even ColUmbia), and it’s inexpensive.

Back to the tour, we also visited Comuna 13, which was one of the poorest parts of Medellín in Pablo’s day. Now it is one big mural of hope: I mean that literally. The inhabitants of Comuna 13 have decorated the walls with colorful graffiti. This is not what we see on the sides of trains and on buildings here. Rather, beautiful, colorful expressions of art represent the transformation of Comuna 13 into the lively neighborhood that it is today. 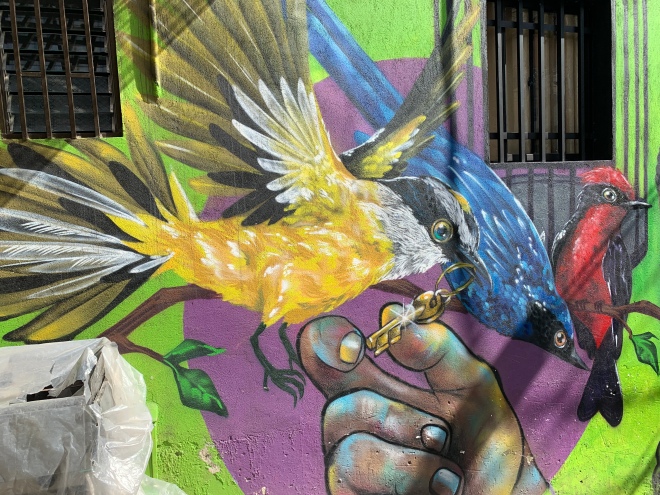 This last one is where you’re supposed to pose if you’re in lurrrrrv…. The community is built right on the side of the mountain. It (thank God) had a series of escalators so you don’t have to walk all the way to the top. Unleashed dogs are plentiful (but not house trained: watch your step). We even saw a dog riding the escalator! Smart doggie!

We met Chota, the artist responsible for many of the murals. Look how young he is (in the white shirt). Such a nice guy. He has photos from when Bill Clinton visited his shop years ago. Cool. 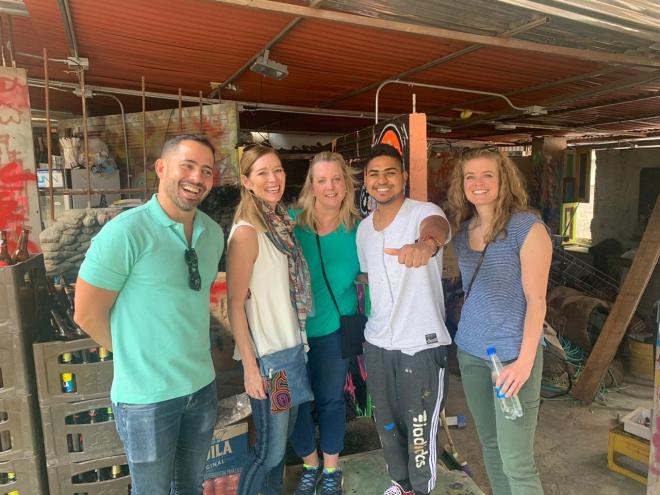 Here’s another cool mural from a shop where they gave us goggles that really made the murals come alive, like looking at Christmas lights with 3-D glasses on. 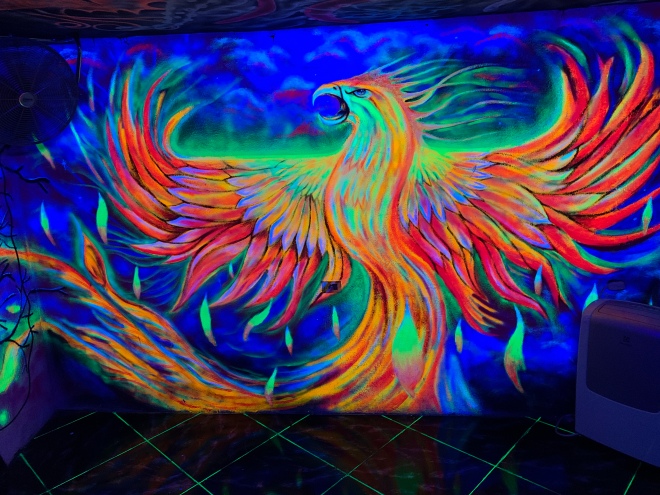 We ate incredible food. Here are some artsy photos from two of the restaurants:

Nick (that cutie in the green shirt above) made sure we had a grand introduction to the city. He insisted we try this stuff called Aguardiente Antioqueño. I got excited at first because I thought it was going to come with a sippy straw like a kid’s juice box. Turns out, that would have been a bad idea. They sold it (and beer and anything else you wanted) on the street and you could walk around with it while listening to the bands in the open air restaurants. It reminded me of straight moonshine…not that I’ve ever tasted moonshine…ahem.

I think that’s all I can fit in this post. Stay tuned for at least one more entry. Hasta la vista!