That Fourth One is Trouble: A Book Review

This is the second time I’ve written this post. Why the second, you ask? Well, because when J.D. Barker is around, creepy things happen. Like whole book reviews go missing, deleted right off my screen. Creepy books happen when he’s around, too. Like The Fourth Monkey.

The Fourth Monkey Killer, or 4MK for short, is not someone you want in your town. I wasn’t real wild about him being in my head while I was reading about him. There’s evil and then there’s downright diabolical; a bad guy whose schtick is to kidnap a young girl and start sending her body parts to her wicked relative as punishment for whatever dastardly deed 4MK considers them guilty. First her ear, gift wrapped in a tidy white box tied with black string. Then her eyes, followed by her tongue, similarly presented. Finally, he puts her out of her misery and stages her body with proof of her relative’s bad behavior so his final message gets across: do no evil.

Our protagonist is a Chicago detective named Sam Porter, a man wounded in heart and spirit. Sam has been chasing 4MK for years before this book begins. He and his witty, ragtag bunch of colleagues chase the monster for several hundred pages of twisty, cringe-inducing drama before the whole thing mercifully draws to a close and the reader can finally exhale.

Barker knows his way around a creepy, tangly plot. After writing The Fourth Monkey, he went on to complete The Fifth to Die and The Sixth Wicked Child. Yes, it’s a trilogy. I started The Fifth to Die at the gym one morning. Halfway down the second page, I nearly fell off the back of my treadmill, it startled me so bad. Yea, that’s how Barker rolls. (For my smart mouthed friends who would say me falling off the back of a treadmill is hardly a surprising thought, I say you read it and see if you aren’t a bit distracted!) Dacre Stoker also tapped Barker to co-write Dracul, the prequel to Stoker’s great-grand uncle Bram’s Dracula. Being the disorganized person I am, Dracul is actually the first Barker book I read. Talk about creepy, oh my gosh. Normally, I read before bed to wind down. Dracul I had to read in broad daylight. Y’all, that is some scary stuff. 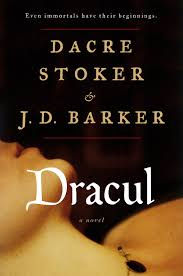 I heartily recommend J.D. Barker’s books. I don’t recommend reading them before bed. Or on a treadmill.